Since its founding, Syracuse University has prided itself on tolerance. Today, the policy is taken for granted, but it was not always so easy to combat discrimination. Beginning in the early 1880s, anti-Semitic in Eastern Europe forcibly dispersed Jews into central Europe and overseas to the United States, and New York in particular. As immigrants reached American shores, many in the established Jewish elite harbored considerable concerns over the potential for a new wave of discrimination. Over the next three decades, anti-Semitism would indeed surface at all levels of American society.

Jewish adversaries bore few anxieties about the rise of African or Irish Americans to power in media, law, finance and government. These “ethnic” groups had never occupied positions of power, the vast majority living in desperate poverty. But Jews were different. They had been exiled from Eastern Europe not because of famine or slavery or crime, but specifically because they were perceived as threatening to national political systems.

To mitigate the perceived risks of Jewish dominance, doorways to affluence were targeted. The most brazen arena was the university, where Jewish enrollment quotas were imposed at many national universities, including Harvard. Rule of law, immigration policies, athletics and discrimination in social organizations (both at universities and externally) entertained anti-Semitic overtones as well.

Born in 1856 to German-Jewish immigrants, native Syracusan Louis Marshall grew up to be an infamous civil rights attorney and political activist. While defending Leo Frank, a Jewish accountant convicted of murder in Georgia, he was appointed to the Board of Trustees at Syracuse University, a position he would hold until his death in 1929. During his tenure, SU successfully avoided official enrollment quotas, though the campus was certainly not immune to the widespread anti-Semitic attitudes of the time.

Marshall was in a difficult position, hedging the interests of a variety of Jewish and non-Jewish constituencies. Jewish interests and ethics varied across the country, an obstacle Marshall often ran into. The increase in anti-Semitism that occurred after his death would cement him as a worldwide hero against discrimination. In Syracuse, his legacy lives on through his namesake,

By the time he was 40, Louis Marshall was among the most distinguished lawyers in the United States. His rhetorical abilities and public presence placed him in a distinctive position alongside other Jewish elites of the time. As Jewish immigration began to escalate near the turn of the century, Marshall, alongside Jacob Schiff and Cyrus Adler, introduced the Galveston Plan, an attempt to direct Jewish migrant ships to Texas in order to avoid a massive assimilation on the eastern seaboard 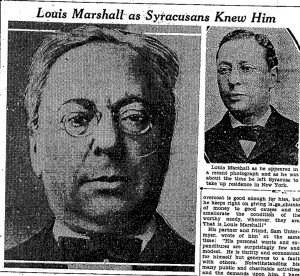 The next twenty years of his life would be spent as the most illustrious opponent of bigotry, fastidiously attached to the growing marginalization of the world Jewry, in particular. It was a difficult position to fill. Human societies were diversifying across the globe, challenging traditionally homogenous power structures. More importantly, the scale and rapidity of immigrant integration was unprecedented, especially in the United States. Jewish immigration grew to extraordinary proportions between 1880 and the mid-1920s. Estimates suggest that roughly two million Jewish immigrants arrived during this thirty-year stretch. [11]

It is difficult to describe the societal tendencies of Jews during the early 20th century without a hint of prejudice. Krefetz (1982) explains that the skills brought from Eastern Europe, namely, “trading and exchanging, commerce, city living, property rights, … and accumulation of funds for future investment” suggest a cultural propensity for achieving financial security. By the 1980’s, Jewish families had the highest average family income of any ethnic group in the United States, a remarkable feat considering their relatively recent arrival. 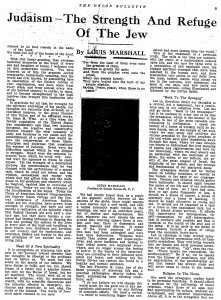 As Marshall’s death approached, he was also beginning to lose the battle at Syracuse.

Barely a month before the Great Depression hit, Marshall passed away at a conference in Zurich, Switzerland.

“I am deeply grieved to learn that my friend Louis Marshall has passed,” wired President Herbert Hoover to the Jewish Telegraph Agency (NY) upon hearing of the Jewish icon’s death. “His eminent services in law, government, conciliation and philanthropy will remain of enduring value to this country.” 19. A year later, Franklin Delano Roosevelt, then the Governor of New York, designated an appropriation of over half a million dollars for to house the College of Forestry named after Marshall (Marshall Hall at SUNY-ESF still stands today) 20. At his death, Louis Marshall was among the most distinguished lawyers and political activists in the entire world.

The Syracuse Post-Standard noted that, “particularly there his effective service was given to the assurance of fair treatment of the Jewish minorities scattered thru the trouble nations of the European continent.” In his later years, Marshall had worked to secure funding for Jews in the wake of WWI. His most notable accomplishment came at the Treaty of Versailles while he was serving as the President of the American Jewish Committee. Here, he helped organize the new constitutions of Eastern Europe, which granted Jews full equality. Unfortunately, the pillars of equality that he had worked so hard to achieve would be unwound after his untimely death. 21.

The decade that followed Marshall’s passing would see a marked rise in anti-Semitism at Syracuse University, a phenomenon he had successfully combated during his fifteen-year tenure. Jewish enrollment deteriorated and social organizations grew increasingly prejudiced.

Beginning in the 1928-1929 academic year, Jewish students were segregated into Jewish-only dormitories. Over the next ten years, an intra-university debate raged over the policy, which was rescinded then re-enacted in 1934 and again in 1935 22.

Meanwhile, Jewish enrollment plummeted. By 1939, the freshman class had been cut to 7% from its 15% peak in 1923 23. In 1935, a year of segregated dormitories, Marty Glickman enrolled as a first-year student at Syracuse. While only eighteen years of age, he qualified for the United States Olympic team in 1936 as a sprinter for the 4x100m relay team alongside Jesse Owens and a multitude of other prolific American athletes. To his dismay, the games were to be held in Nazi Germany.

Burdened by the debts of WWI and the Great Depression, Germany was among the most nationalistic – and racially obsessed – of the entire Western world. More than blacks or any other ethnic minority, German anger was directed towards Jews, as the shadow of the Holocaust reminds us. Jesse Owens and fellow African-American Ralph Metcalfe would end up running the relay in the place of Marty Glickman and Sam Stoller, Jewish sprinters from Syracuse University and the University of Michigan respectively. The pair served as the American track and field team’s only Jewish members, and had been expected to anchor the team. 24

The hostilities began just 24 hours before the 4×100 relay final. Foy Draper and Frank Wykoff, sprinters from USC, were selected to run the relay alongside gold medalists Owens and Metcalfe. After setting world records in the 100m, 200m and the long jump, most expected that Owens would hang up his spikes and watch while his teammates competed in the 4 x 100 meter relay, an event they were certain to win regardless of his participation. Either way, there was little question that Glickman and Stoller should have rounded out the team. “Draper and Wykoff…had been beaten by both Stoller and Glickman in time trials last week,” The New York Times reported in the days following the race. The motives behind Glickman and Stoller’s unseemly dismissal remain a mystery, though anti-Semitism was the obvious culprit. 25

Surprisingly, Hitler did not explicitly request the removal of Glickman and Stoller from the American 4x100m team. The Chairman of the U.S. Olympic Committee, , was a friend and sympathizer of Hitler. Brundage was the member of several committees and athletic clubs that prohibited Jewish members, a common occurrence in the era. He is more famous for his order to continue with the 1972 Munich Games after twelve Israeli athletes were executed by Islamic extremists. It should come as no surprise then, that Brundage is thought to have been responsible for Glickman and Stoller’s removal. Today, there are few historians who doubt Brundage’s motives. 26

While Glickman would blame blatant racism for the incident in the years following, his immediate reaction was less explicit. During an interview with The New York Times, Glickman charged that “politics” caused his dismissal, a result of Olympic Coach Dean Cromwell “looking out for the Southern Californians.” It was indicative of an era where anti-Semitism was largely muted and operated under the radar. 27

Glickman and Ed O’Brien, Syracuse University’s other 1936 Olympian, were asked to contribute editorials to the Daily Orange about their experiences in Berlin. Each were allocated a half-page column of about 250 words. Both students expressed anger towards the US Olympic Committee for its spontaneous removal of Glickman, with O’Brien briefly describing it as a “raw deal”. Glickman also expressed frustration and allotted an equally small segment of his column to the incident. While the event seems momentous and infuriating today, it was less significant in the moment. Neither O’Brien nor Glickman mention the anti-Semitic attitudes thought to have driven the decision. 28

It became apparent that neither the administration nor the student body had interest in advocating for Jewish interests. With Marshall deceased, no Jewish figures held enough power to prevent the flirtations with anti-Semitism throughout the 1930s. A series of letters written by SU Chancellor William Graham, who served during the late 1930s and early 1940s, suggest approval of anti-Semitic media coverage. The most damning letter (January 24, 1939) expressed support for Father Charles Coughlin, who hosted an anti-Semitic radio show that would endorse Hitler and Mussolini beginning in 1936. 29